Thought creates the world say several quantum phsyicians. We are in the midst of a paradigm shift – between two ways to interpret the world – the Newtonian world view that prevailed for about 300 years, and the holographic paradigm that can be seen as a synthesis of modern physics and Eastern ideas.

Our old world view based on matter is being replaced by the belief that the world basically is made up of energy – that the energy world may even be the primary reality from which the secondary reality emerges. The base energy is said to be the quantum field/zeropoint field – the underlying whole – that contains everything that is, everything that was and everything that can be. 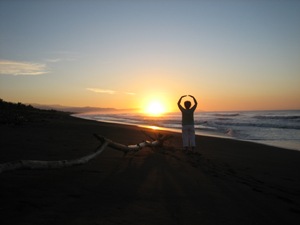 We seem to live in a conscious universe, a living organism/body with an intelligence that we humans are part of. Where everything is interconnected, where nothing in the end is detached. It is a myth that we are so separated from each other as we believe. We seem to be cells in a larger universal body and everything we do make imprints and affect everything else in this boundless energy field. We are part of this web of relations and communicate with the unvisible field all the time – whether we aware of it or not.

The consciousness of humanity is one and has to be trans-formed if we want to change the world, said David Bohm. This insight opens fantastic possibilities to transform our world – on the energy level, before we manifest a negative, fear-based future. To understand that my individual thoughts, choices and decisions co-create the world that takes form, and that I can take responsibility for what I contribute to the larger whole.

Next CREATIVE STATE OF MIND